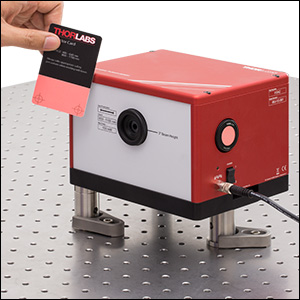 Click to Enlarge
This interferometric autocorrelation was obtained using our Octavius® laser. UMC10-15FS Precompensating Mirrors were used to chirp the beam prior to entering the autocorrelator.

A BNC connector outputs the autocorrelation signal, which can be viewed on any oscilloscope with >1.5 MHz bandwidth. An example of the direct output from the FSAC is shown in the graph to the right. A photodiode amplifier with selectable gain from 0 dB to 70 dB provides compatibility with a large range of optical input powers, up to a maximum average power of 150 mW.

Intuitive, easy-to-reach controls on the outside of the enclosure allow the user to optimize the resolution and fringe contrast. The controls for the delay arm enable a full scan range of 50 fs to 10 ps (i.e., ±25 fs to ±5 ps), and a micrometer tunes the detector's position for maximum signal. Detailed usage recommendations and examples are available in the manual.

Setup Details
The FSAC autocorrelator is compatible with horizontally polarized input beams up to Ø4 mm (1/e2) and has a beam height of 3" (76.2 mm). A permanently installed SM1D12D Ring-Actuated Iris and an internally SM1-threaded side port provide two reference points for optical alignment. We include a VRC2SM1 Alignment Target and an SM1CP2 End Cap for this side port. To align, simply insert the FSAC into the beam path and rotate until the beam is centered on the target. A flip mount may be used to pick off the beam for regular diagnostics.

Two slots in the enclosure allow the autocorrelator to be locked down with the two included CL5 Table Clamps. In addition, three 1/4"-20 and three M6 x 1.0 tapped holes are located in the base, allowing the unit to be elevated to a desired height. Alternatively, the beam height and polarization may be adjusted by a suitable periscope, such as Thorlabs' RS99(/M) Periscope Assembly. In the image to the right, Thorlabs' Ø1" (Ø25.0 mm) Pedestal Posts have been used to set the FSAC at an optical height of 4.75". Recommended posts are given in the Specs tab.

It is important to note that the pulse width measured by the unit is obtained immediately before the photodiode. Thorlabs' Chirped Mirrors may be used to compensate for dispersion in the optical path. The group delay dispersion caused by the FSAC's internal optics is nominally 230 fs2 at 800 nm. Pulses as short as 40 fs FWHM can typically be measured without precompensation, but sub-40 fs FWHM pulses will require it. See the Precompensation tab for more details. 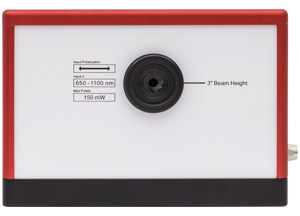 Click to Enlarge
Front View
The front is labeled with the design input beam parameters. 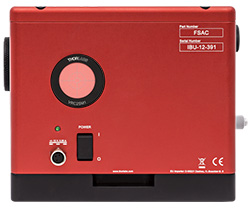 Click to Enlarge
Side View
Each side has a centered slot that accepts
one of the included CL5 Table Clamps. 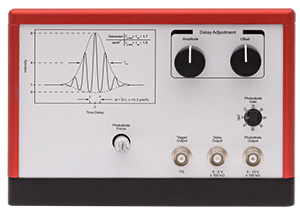 Click to Enlarge
Back View
The back has controls for the scan range, photodiode
gain, and photodiode position, as well as the three
BNC outputs (see the Pin Diagrams tab).

To reduce the effect of systematic error on pulse width measurements, we recommend precompensating for the dispersion caused by the FSAC's internal optics (e.g., the beamsplitter and focusing lens). Due to the significant and complex influence of dispersion on short-duration pulses, precompensation is most beneficial when measuring pulse widths from 40 fs down to 15 fs. For example, the systematic error on a Fourier-transform-limited 40 fs pulse is less than 10%, while the error reduces to less than 3% for pulses longer than 50 fs. The following describes a setup for providing precompensation using Thorlabs’ ultrafast optics.

The precompensation setup is placed between the input laser beam and the FSAC, as shown in the diagram to the lower left. We simulated the effect of this setup on the measurement results of 15 fs pulses produced by an OCTAVIUS-85M (previous generation) femtosecond laser. The dispersion precompensation optics comprised two UMC10-15FS chirped mirrors, between which the beam reflected five times, and a 1 mm thick UDP05 Infrasil® window. One reflection from Thorlabs' chirped mirrors provides -54 fs2 group delay dispersion (GDD) at 800 nm. Two UM05-AG silver mirrors were used to route the beam but did not contribute to the dispersion precompensation.

Click to Enlarge
An illustration of a setup that uses chirped mirrors to compensate for the GDD caused by the internal optics of the FSAC. The graph to the right shows the results of a theoretical calculation of the effect of this setup on the autocorrelation measurement of a 15 fs pulse.

The download button below links to sample scripts that convert the interferometric autocorrelation from the FSAC into an intensity autocorrelation. Details are in Section 5.3 of the manual. 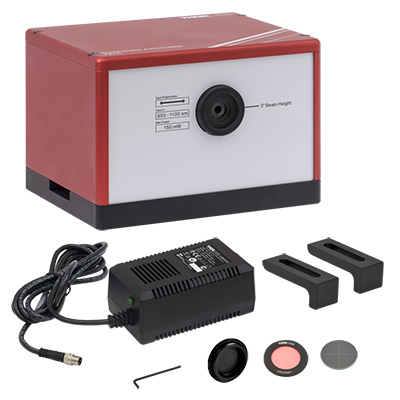 Each FSAC ships with the following: