Typical transmissions for the OM6N (solid) and OM6NH (dashed) modulators at 700 nm (blue traces) and 1100 nm (red traces). For each unit, the full transmission (at 0 V) differs with wavelength due to the reflective nature of the gold-coated mirrors. Additional performance graphs are available on the Graphs tab. 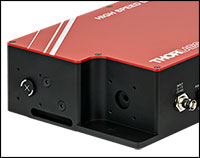 Thorlabs' Fast Laser Power Modulators use deformable mirror technology to provide high-speed intensity modulation and beam attenuation. The all-reflective design incorporates gold-coated MEMS mirrors that are polarization independent and introduce minimal (<100 fs2) dispersion. This unidirectional device is designed for a collimated, 1 to 2 mm (1/e2) diameter input beam with up to 10 W of optical power and up to 500 nJ of pulse energy, enabling use with popular 1 µm high-pulse-energy photoactivation lasers. These modulators are available with either standard (>250:1) or high (>2500:1) contrast ratios.

Transmission, which is a function of both input voltage and wavelength as shown in the graph to the right, is controlled by a 0 to 1 V analog input voltage; this voltage can be easily generated by off-the-shelf data acquisition (DAQ) hardware or other electronics. The device supports continuous DC operation as well as modulation frequencies up to 20 kHz, making it ideal for imaging applications such as fly-back blanking or region of interest (ROI) selection.

The higher contrast achieved with the OM6NH(/M) modulator is made possible by incorporating two MEMS mirrors, the deformation of which behaves like a grating, into the design; one diffracts horizontally and the other vertically to provide enhanced contrast performance.

Ideal for Photoactivation and Two-Photon Fluorescence Applications
This modulator is suitable for many applications including two-photon fluorescence microscopy and photoactivation. Both of these techniques require fast laser power modulation of ultrafast NIR laser pulses, such as those generated by the tunable Ti:sapphire Tiberius® laser, to limit sample exposure during imaging and reduce thermally induced damage. High-speed modulation is traditionally accomplished with bulk crystal modulators, such as Pockels cells and acousto-optic modulators (AOMs). As they rely on bulk materials, they introduce significant dispersion, degrading image quality.

Replaceable Photodetector
An internal beam sampler directs a small portion (<1%) of the modulated beam to a separate output port where a photodetector can be used to monitor the transmission. If desired, the included, pre-installed Thorlabs PDA100A2 Si Switchable Gain Detector can be easily removed and replaced with a user-supplied detector; to do so, loosen the 8-32 mounting screw located on the underside of the modulator.

Housing and Mounting Features
The input and output ports of the laser power modulator feature internal SM05 (0.535"-40) threading, which can be used to install external SM05-threaded alignment targets or irises (not included). All three ports also have 4-40 threaded holes for compatibility with our 30 mm cage systems. To aid in initial alignment, we recommend using an SM05 slotted lens tube or a 30 mm cage system assembly on the modulator input.

Three slots in the enclosure allow the modulator to be mounted directly to an optical table with table clamps, such as our CL6 clamps (not included), resulting in a minimum beam height of 1.25". The base also includes three 8-32 (M4) mounting holes for attaching pedestal posts, which can be used to elevate the modulator to the desired beam height.

The unit is shipped with a 24 V power supply with an KPJX-4S-S connector for the modulator, as well as a ±12 V supply for the photodetector. For more information, please see the Pin Diagrams tab.

This data reflects the typical performance of our high-speed optical modulators and is presented for reference only. The guaranteed specifications are shown in the Specs tab.

Click to Enlarge
Typical transmission for the OM6N and OM6NH at 700 nm. The transmission will vary from device to device. Please note that the maximum contrast ratio, defined as maximum transmission to minimum transmission, can only be achieved when the extinction voltage is carefully calibrated.

Click to Enlarge
Typical transmission for the OM6N and OM6NH at 1100 nm. The transmission will vary from device to device. Please note that the maximum contrast ratio, defined as maximum transmission to minimum transmission, can only be achieved when the extinction voltage is carefully calibrated.

Click to Enlarge
Plot showing the high-frequency temporal response of the OM6N(/M) and OM6NH(/M) Optical Modulators.

Beam Quality for the OM6 Modulators

In designing Thorlabs' OM6 Fast Laser Power Modulators, reliably maintaining output beam quality was a priority. This is because a beam's mode quality is important for a wide range of applications, including telecommunications and two-photon microscopy.

These modulators are polarization independent and have no significant impact on the transmitted beam profile, as shown in the images below, which were acquired using the previous generation BC106N-VIS CCD Camera Beam Profiler, the S1FC1060 1064 nm Laser Source, and the OM6N Fast Laser Power Modulator. The leftmost image shows a beam profile before entering an OM6 modulator. The right three images show the beam profile after being modulated. This data is representative of all OM6 Fast Laser Power Modulators. 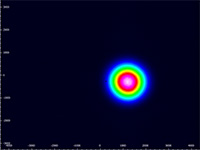 Click to Enlarge
Beam profile before reaching a OM6 modulator. 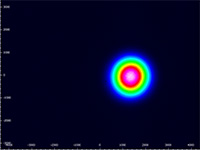 Click to Enlarge
Beam profile after traveling through a OM6 modulator with full
transmission. 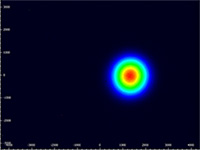 Click to Enlarge
Beam profile after traveling through a OM6 modulator with 20% transmission. 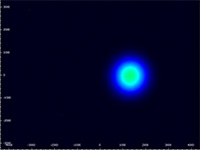 Click to Enlarge
Beam profile after traveling through a OM6 modulator with 10% transmission. 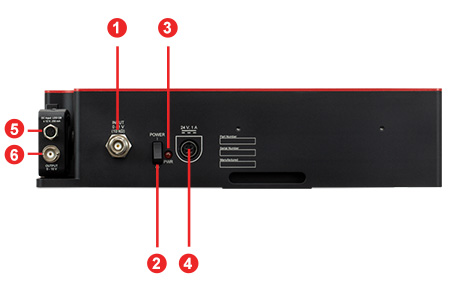 *For the Included LDS12B Power Supply