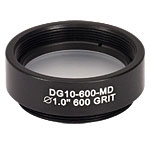 Thorlabs' Mounted N-BK7 Ground Glass Diffusers can be used in a variety of applications requiring a diffuse Gaussian-like distribution. They are offered in 120, 220, 600, and 1500 grit polishes. Each grit polish is available in Ø1/2", Ø1", and Ø2" versions, housed in SM05-, SM1-, and SM2-threaded mounts, respectively. Each SM-threaded mount is engraved with the item number, the diameter size, and the grit. When positioning the diffusers, the grit-polished side should face away from the source. 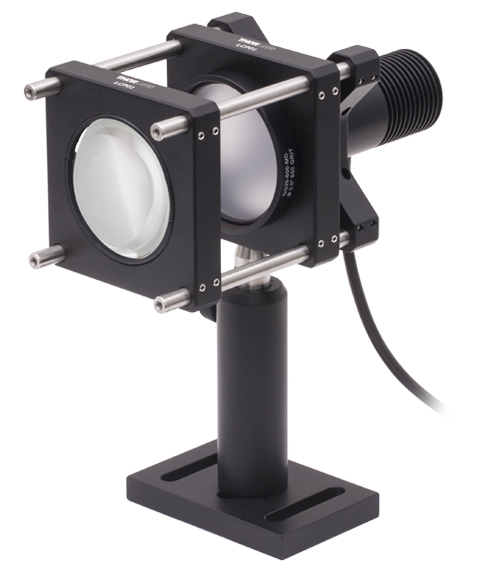 The setup shown to the right uses a DG20-600-MD, Ø2", 600 Grit Ground Glass Diffuser as part of a homemade Diffused LED Condenser, which collimates the light exiting the LED source. Although Thorlabs also manufactures out-of-the-box collimated LED light sources, which essentially provide the same result, the one shown here is perfect for those inclined to build their own, perhaps as part of an educational setup. In this particular case, the setup was built using a 60 mm cage system. If you are not familiar with Thorlabs' 60 mm cage assemblies, they consist of cage-compatible components that are interconnected with cage rods. Each cage component features four tapped holes with center-to-center spacings of 60 mm, and they are joined together into a cage system using Ø6 mm rigid steel cage rods; in this case, 4" long cage assembly rods were chosen. The reason for building a cage system is to ensure that the optical components housed inside the cage system have a common optical axis.

To integrate the MWWHL4 Warm White Mounted LED, which has internal SM1 (1.035"-40) threading, into the 60 mm cage system, the mounted LED was threaded into an LCP02 30 mm-to-60 mm cage plate adapter using an SM1T2 Lens Tube Coupler. Next, the light source is directed through a Ø2", 600 grit ground glass diffuser, which is mounted using an LCP01 60 mm Cage Plate. After exiting the diffuser, the divergent light is collimated using an LA1401 Plano Convex Lens with a focal length of 60.0 mm. The lens is also housed in an LCP01 60 mm Cage Plate. 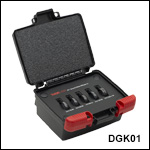 Please see the table to the right for the contents of this diffuser kit. The table below contains specifications for the alignment disk DG10-1500-H1-MD.