These fixed adapters are designed to facilitate the integration of cylindrical components such as collimators into free-space optical setups. We offer adapters that feature external SM05 (0.535"-40), RMS (0.800"-36), or SM1 (1.035"-40) threading as well as adapters that have a smooth 1/2" or 1" outer diameter. The threaded adapters are compatible with our lens tube systems, cage systems, and numerous components in our product line. The non-kinematic unthreaded adapters are best suited for use in kinematic mirror mounts, allowing a collimated beam to be steered by the mount. Each adapter is designed so that the optical axis of the cylindrical component will be centered with respect to the outer diameter of the adapter. 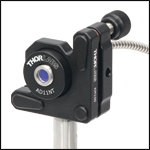 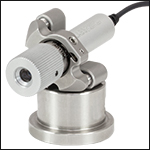 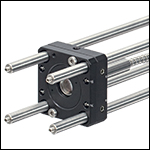 Scroll down to read about some practices we follow when setting up lab equipment.

Click here for more insights into lab practices and equipment.

This Video Insight demonstrates an approach for aligning two fiber collimators, so that the collimated beam provided by one is coupled into the second with high efficiency.

Two collimators, inserted into a fiber optic setup, provide free-space access to the beam. The first collimator accepts the highly diverging light from the first fiber and outputs a free-space beam, which propagates with an approximately constant diameter to the second collimator. The second collimator accepts the free-space beam and couples that light into the second fiber. Some collimation packages, including the pair used in this demonstration, are designed for use with optical fibers and mate directly to fiber connectors.

Ideally, 100% of the light emitted by the first fiber would be coupled into the second fiber, but some light will always be lost due to reflections, scattering, absorption, and misalignment. Misalignment, typically the largest source of loss, can be minimized using the alignment and stabilization techniques described in this video.

If you would like more information about tips, tricks, and other methods we often use in the lab, we recommend our other Video Insights. In addition, our webinars provide practical and theoretical introductions to our different products. 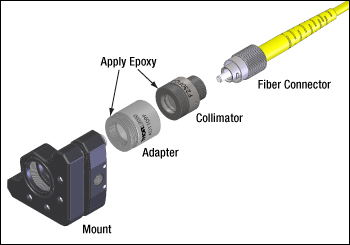 Click to Enlarge
Figure 1: The components shown above are joined using threaded interfaces. Since unscrewing the fiber connector could unintentionally loosen connections between the other components, Thorlabs suggests applying epoxy to the other two interfaces to immobilize them.

For both packages, Thorlabs typically suggests the use of an adapter with a nylon tipped set screw that holds the barrel against a two line contact.

Adapters for the external thread are available (AD1109F) that allow the user to thread the fiber collimator into a mount.

However, the use of these adapters results in a stack up of threaded interfaces (threaded fiber connector, threaded collimator, and threaded adapter). As a result, it is possible that unscrewing the fiber connector could inadvertently loosen another thread interface and create an unknown source of instability in the setup.

For this reason, Thorlabs suggests epoxying the threaded fiber collimators into the threaded mounts if that mounting mechanism is preferred.

Figure 1 indicates the assembly order and places to apply the epoxy. 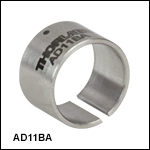 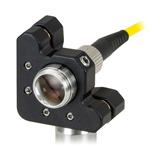 The adapter design centers the collimator within the outer diameter, which in turn aligns the collimated beam to the center of the mount it is held in. A black dot is engraved on each adapter, opposite to the split bushing slot, to indicate the location where the adapter should be clamped within a mount. 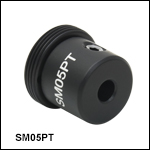 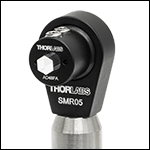 The SM05PT and AD48FA adapters are designed to mount Thorlabs' GRIN Lens Fiber Collimators or Hexagonal Light Mixing Rods, respectively, in SM05-compatible mounts, lens tubes, and cage components. Each adapter's design ensures that the center of the component is aligned with the optical axis when mounted into a SM05 lens tube. Nylon-tipped setscrews secure the component against the two lines of contact created by the double-bored mounting hole. Additionally, there are holes on opposing sides of the central bore that are mechanically compatible with our spanner wrenches listed below.

There are two methods of mounting the hexagonal rods in the AD48FA adapter. Fixing the two setscrews onto a planar side of the rod will provide more mechanical stability. Please note TIR will be interrupted where the nylon touches the planar surface of the rod. Mounting the rod with the nylon-tipped setscrews in contact with an edge of the hexagonal rod will limit the contact between the setscrew and the optical surface, improving the optical performance. It is recommended that the mixing rod be mounted centered in the mount, so that no more than 5 mm of the rod extends past the edge of the mount on either side.

A version of these mounts with SM1 threading is available; please see the SM1PT and AD48F adapters below. 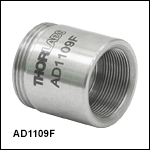 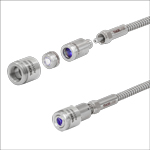 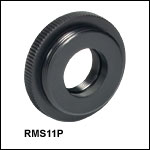 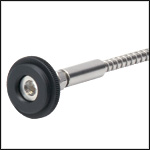 The RMS11P is designed to integrate M11 x 0.5 threaded collimation packages into internally RMS-threaded (0.800"-36) components. The knurled outer edge allows the adapter to be secured without a spanner wrench. 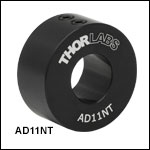 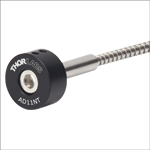 These collimator adapters are designed to mount fixed collimation packages in Ø1" (Ø25.4 mm) mounts. Each adapter has a double bored center hole and an unthreaded 1" (25.4 mm) outer diameter. Two nylon-tipped setscrews hold the collimation package against the two lines of contact created by the double bore. Both setscrews feature a 1/16" (1.5 mm) hex socket. The adapter design centers the collimator within the outer diameter, which in turn aligns the collimated beam to the center of the mount it is held in. 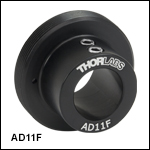 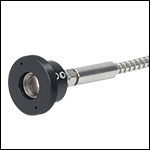 These SM1-threaded (1.035"-40) adapters are designed to mount Ø3.5 to Ø16 mm collimators and cylindrical components in SM1-compatible mounts, lens tubes, and cage systems. Each adapter has external SM1 threads and a double-bored center hole. All adapters include setscrews with nylon tips that are used to press the collimation package against the two lines of contact created by the double bore (see the mechanical drawing to the right) and position the collimation package so that its optical axis is coincident with the center of the SM1-compatible mount in which that the adapter is placed. The size and number of setscrews included in each component is listed in the table below.

Except for the AD8F and AD15F, each of these adapters contains holes on opposing sides of the central hole that are mechanically compatible with our SPW909 and SPW801 spanner wrenches.